Email from Vivek about a Camel Story and Dream 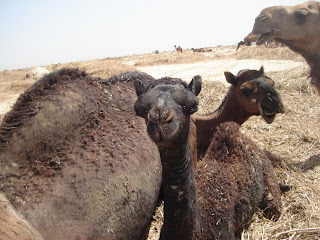 Dear Raziq and colleagues,On the occasion of BSA 2012 award ceremony one women livestock keeper from Tamil Nadu was curious with camel story and interacted with Dayali Devi Raika and Rajasthan group  .Khieta ram Raika ( if we are correct -young man ) told that they are not sending camels for slaughter purpose even after attaining old age  against a question asked by Tamil Nadu woman. The woman wondered about the story of creation of camels by Lord Shiva after Goddess Parvathy made camel like structure  using clay material as explained by us  . That is why she raised the question that such a sacred creation is sent to slaughter purpose after attaining old age  . (According to her Lord's  creation shall be allowed for full life till death ) . The next day Tamil Nadu woman offered Rs 50 to Dayali Bhai . We asked the reason for offering Rs 50 . Tamil Nadu woman told that  she had dashan of Lord Siva and Parvathy together in her dream last night and they (Siva and Parvathy ) were telling that they are on the way to Rameswaram and remove her (TN woman ) sin's too. Those are blessed who ask  such question with full faith upon camel story ? . Lastly TN women told that Rs 50 is given for her to do Pooja for Lord Shiva after Dhyalibhai return to her native place . She also told that camel keepers are together coming  along with Lord Siva and Parvathy as she believes.Those who work for camels including Raziq are also blessed by Lord Siva and Parvathy . OK Raziq !Those who  respect LIFE of all creatures to the extent possible are  blessed by the creator ? Sincerely,
P.Vivekanandan,
SEVA,
Posted by Fighting with the Desert Storm at 10:23 PM No comments:

The Story of Kharai Camel


The Kharai camel breed is rare species which thrives only in mangrove forests. In Kutch region usually, the camels spend 3 days feeding in the mangroves and then one day back on the mainland for drinking fresh water and then the cycle repeats.

In Kutch region of Gujarat about 16 generations ago (400 years back) camels have been maintained by Rabaries (Hindus) in Pipar village, Lakhpat taluka . During that time there was a dispute in one of the Rabari family when they want to divide their property between 2 brothers. There was only one camel left in the family and 2 brothers wanted to own the single camel and they were unable to settle the matter. They went to one Muslim saint named Savlapir who lives in nearby Mangroves Island adjacent to the village. By seeing the complicated issue Savlapir made a small camel with clay and he asked choice of 2 brothers to take each one takes one camel.

The elder brother immediately opted for living camel and it had been given to him. Then the younger brother with the blessings of Muslim saint had to take the clay camel with him. Savlapir told that the single clay camel which will be multiplying into many camels on the way to his home.  The Muslim saint advised the younger brother that he should not turn back while returning home. The saint told the younger brother he can hand over surplus camels to the Muslim community in case Rabari families unable to maintain them. Then many camels appeared and followed the younger brother. The younger brother had a doubt in his mind to see back whether camels are really following him. Then he turned back.This has stopped the further appearance of new camels and he returned home with many numbers of camels already appeared along with him.
Now a day there are no Rebaries has been rearing the camels but the Jat community (Muslim) alone keeping the kharai camels. One of the Jat (Muslim) family Mr.Aga Khan Savlani who is living now in Pipar village can be traced back to 16 the generation of the Muslim saint Savlapir who lived in the island of mangroves.

Source: This story has been revealed by Mr. Ramesh Bhatti,  Sahjeevan, Bhuj, Gujarat
Recorded by:  P.Vivekanandan, SEVA Jan 2013.
Posted by Fighting with the Desert Storm at 10:21 PM No comments: